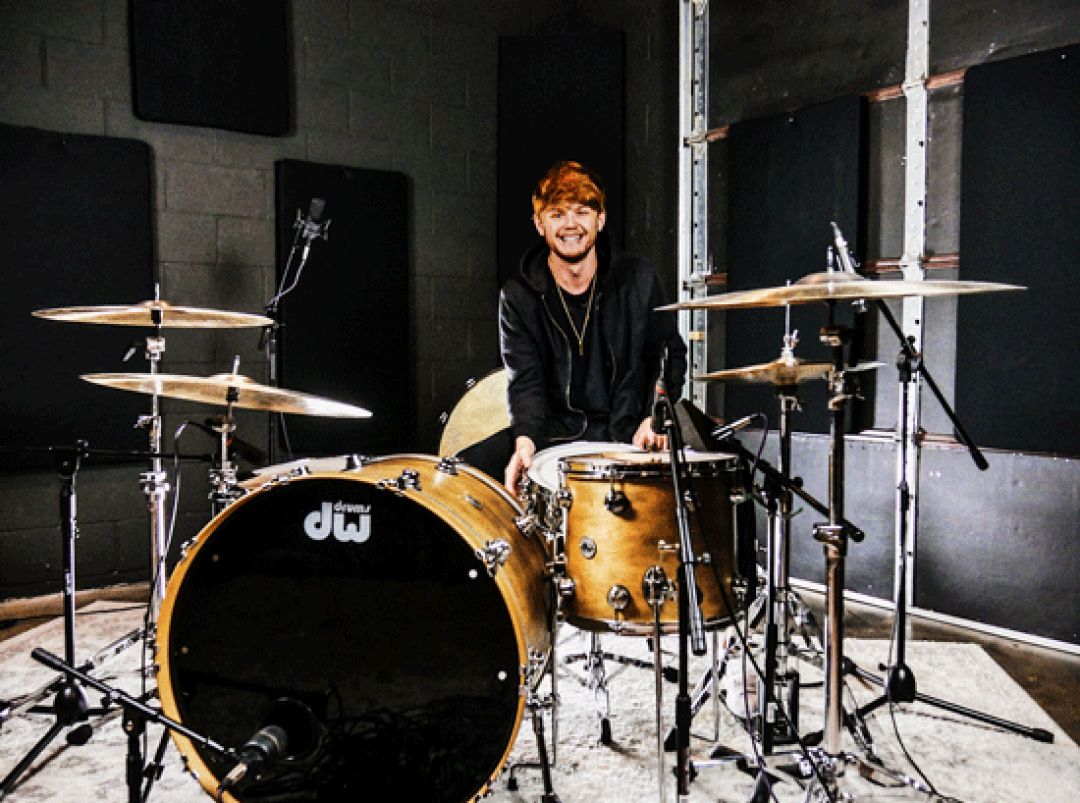 With a confidence reflecting an instrumental and compositional maturity that both belie his age and announce the arrival of an exceptional talent, Jordan Harvey exudes what guarantees to be a profoundly successful career. Born February 15th, 1992 and raised in Edinburgh Scotland, he showed a very keen interest in music from a very young age. Jordan started playing drums at the age of 13 due to his family raising him on a diet of Elvis Presley, The Beatles, Chaka Khan and Earth Wind and Fire among others. At age 16, Jordan won the young vocalist of the year competition for the Edinburgh and Lothians. He was also runner-up in the Scottish Finals. In January 2011 Jordan was accepted to study his one-year Cert HE in Popular Music Performance at Tech Music Schools in London (aka BIMM). He was coached by some of the industry’s top drummers. Studying at Tech Music Schools provided Jordan with the opportunity to play with some of the UK’s top session musicians including Dave Troke (Dido, John Newman), Phil Simmonds (Jessie J, Bassment Project), Jon Shone (One Direction), Hugh Neal (James McCartney) and Christoffer Borud (Cee Lo Green, John Newman). Whilst at Tech, Jordan’s lecturers introduced him to several incredible drummers including Steve Gadd, Bernard Purdie, and Tony Williams. He graduated from Tech Music School with Distinction/Merit across all three terms. Educated as a session musician, Jordan is well skilled in several different musical styles and thrives on a daily basis to improve his overall ability. He also plays multiple different instruments including guitar, piano, Harmonica, Bass, and vocals. in 2015, Jordan achieved his Avid certified Pro Tools 110 user certificate and works as a producer and composer alongside his career as a musician. After departing London in January 2012, Jordan picked up his first professional gig with Edinburgh Indie/Pop band “The Ok Social Club”. During the three year stint with the band he recorded drums and percussion on their two albums “Nothing in Common” and “Baby Eat Your Heart Out”. The lead single “The Shape Of Things To Come” from the first album was play-listed on BBC Radio 6 and aired on mainstream television shows such as Sunday Brunch (Channel 4), Hollyoaks and E4. Jordan toured extensively with the band playing several sold-out shows at incredible venues and festivals across the UK and Europe. TV Credits include BBC, E4, SkySports, Channel 4 and MTV Rocks. Today Jordan Harvey is a highly recommended session drummer and has worked with many of the UK’s up and coming artists such as Callum Beattie (Universal), Mark Angels, Rebecca Shearing and E M I L I E. Jordan also tours and records with RUF records artist Dana Dixon. Previously, Jordan was also invited by New York City artist Andromeda Turre to play for the performance of “Kiss Me” at the Edinburgh Fringe Festival. In 2016, Jordan recorded drums for several artists including Greg Pearson, Becca Fox and Ross Campbell (Mark Ronson). Jordan also began the filming and preparation for the TV series “Let It Shine”. Finally, last summer Jordan graduated from Edinburgh Napier University with a first class honours degree in Popular Music Practice. Professionally, 2017 was an incredible year for Jordan. The first 8 weeks of the year were occupied with him starring as a contestant on Gary Barlow’s BBC One Saturday night television show “Let It Shine”. Here, Jordan showed his versatility by singing, dancing, drumming and acting which made him a fan favourite. His journey came to an end on the 18th of February and he left the show as a semi-finalist (4th) along with his other bandmates. Since the show, Jordan began writing for his next EP. In order for him to do this, he decided to take a long trip to Nashville to pursue his dreams as a drummer and a singer-songwriter. Whilst in Nashville, Jordan has made great friends with Garrett Goodwin (Carrie Underwood), Rich Redmond (Jason Aldean), Jim Riley (Rascal Flatts) and many more top musicians. He has also spent a great deal of time co-writing and has finished writing all the material for his next EP which will be set for release next spring. Jordan is now returning home from Nashville to apply for his O-1 visa so that he can live and work in the U.S. 2018 is set to be a big year for Jordan Harvey. Having signed a publishing deal with Amadavis Entertainment, A highly respected music entertainment/publishing company based in Nashville, TN. Jordan is set to release new music in 2018 and hopes to tour extensively. His goal is to also begin his online educational school and coaching services that will be accessible via his website www.jordanharvey.co.uk. 2018 will also see the release of his debut educational book called the “Fundamentals for the Modern Pop Drummer”