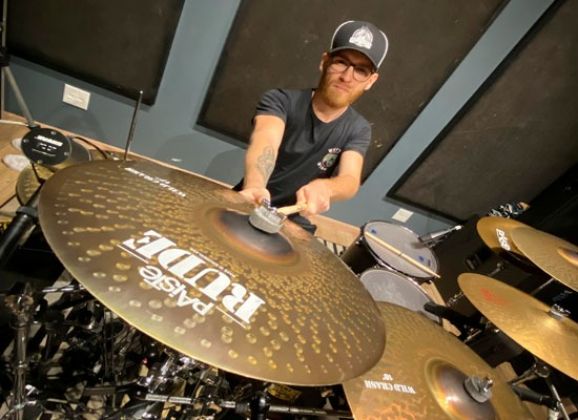 Alexandre Oliveira, a Brazilian drummer, was born on October 30, 1988 in Belo Horizonte. His career started in 2003 when he immersed himself in a 5 year drumming course at Harmony Music, coached by Juninho Mota. As a drummer he toured all over Brazil and shared the stage with renowned bands and artists such as: Sepultura, Emicida, Scalene, Pato Fu, Dead Fish, Ira, Nação Zumbi, Jota Quest, Skank, Architects, The Used, Funeral For a Friend, Comeback Kid, Poison the Well, and others. In addition, he participated in several television programs as Jornal Nacional, Globo Horizonte, MTV Lab BR, Acesso MTV, among others. In 2009 he won the Minas Gerais Independent Music Award (PMMI) with the bands Dilúvio and Nihil. His musical training continued in 2010 when he had the opportunity to live in São Paulo where he worked in studios giving drum lessons and making recordings for bands and solo artists. In 2014 he took on a partnership with Monkey studio and worked as a studio musician, recording for countless bands and artists. In that same year, he became a member of the metal bands Raising Conviction and The Southern Blacklist. The following year he joined the band Tianastácia, a band that has been going for more than 2 decades, with significant performances in Pop Rock Brasil, Rock in Rio etc. In 2018 he auditioned for the Popular University of Brazilian Music - BITUCA, and among the nearly 300 students, he was one of only a few who were accepted onto the course, which was completed in 2020. Later that year, he joined the band The Troops of Doom, invited by Jairo Guedz (ex-Sepultura), as well as the metal band Eminence. He also became a Paiste artist member. Driven by his dedication to share his passion with others, Alexandre has been tutoring students privately for over 10 years. Lately he has taken up teaching positions at the music schools Emes and School of Rock, where he continues to work to this day.