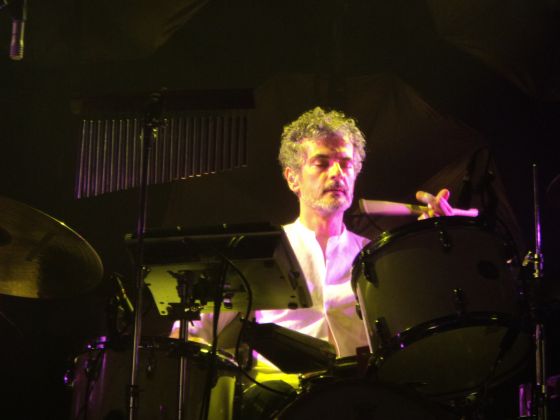 Simone Pace is the drummer for the critically acclaimed band Blonde Redhead. Born and raised in Milan Italy, he started playing the drums at age 16 while living in Montreal. Simone studied guitar as a child but was inspired to switch to drums after seeing his high school biology teacher play them in a big band. His school lunch breaks happened to coincide with the band’s practice time, and he would watch them play through a small window in the courtyard. His first drum set was purchased from that same teacher – actually just a bass drum and floor tom. His father bought him “the worst snare you could ever imagine” from a department store, and that was his first setup! After attending the Berkley School of Music in Boston, Simone moved to NYC to further develop and refine his style of drumming. He studied with drummers of many different styles, including Portino, and went to see live bands almost every night. After his twin brother Amedeo joined him in NY and they met Kazu Makino, Blonde Redhead began playing and rehearsing in New York in 1993, drawing inspiration from the city's underground music scene and movie soundtracks, and performing everywhere they could. They signed to Steve Shelley’s (Sonic Youth) label Smells Like Records in 1994, and their self-titled debut was released that year, followed by La Mia Vita Violenta. In 1995 they signed to Touch & Go on which they released three more records. Since 2003, Blonde Redhead have been on 4AD on which they've released Misery Is A Butterfly followed by 23 in the spring of 2007. Simone has been able to develop his own unique musical voice, fluidly controlling electronics and keyboards while simultaneously playing drums. He combines strength, melody, and unconventional elements to his drum beats and his delivery is unique and refined. Simone's favorite drummers are Charlie Watts, John Bonham, Ringo Starr, Laurence Tolhurst, Jimmy Cobb and Tony Williams. Currently he owns two drumsets, both small Gretsch kits from the 70s with 18” kick drums and small toms. Of the two, his favorite is a white set that originally belonged to Lenny White. When not attending to a full recording and international touring schedule, Simone finds the time to produce and collaborate with other artists, and to pursue his interest in rebuilding and riding vintage Italian motorcycles.