„I always loved Paiste for a sound, but when Paiste reached to me and I took one set of cymbals from them , that answered all my questions regarding cymbals for years! Cymbal question is over! “ 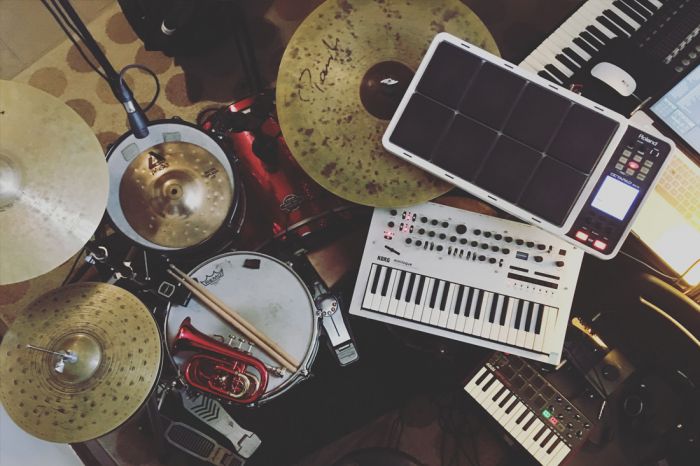 Since the early days, Adas Gecevičius (1990-06-17) devoted his life to music. He attended the renowned M. K. Čiurlionio music school, where he explored piano and accordion. In 2003, he began playing drums in various rock bands, writing new music, and participating in various youth music competitions nationally and internationally. In 2010, Adas began his studies in the Lithuanian music and arts academy as a jazz drum major. His love for the instrument and genre led him to form “Sheep Got Waxed.” The alternative jazz trio gained recognition both nationally and internationally over the years. In 2011, they won the “Grand Prix” award in the “Vilnius Jazz Young Power” contest. In 2012, they were nominated the Golden Stage Award(Auksinis Scenos Kryžius) for music written for the play “Fight Club.” Finally, in 2014, “Sheep Got Waxed” released their debut album that created a positive audience response. While with the group, Adas decided to work on his solo project as an electronic musician, and in 2012, became the official face of the Swiss cymbal company “Paiste.” After signing with the brand, he participated in the international drummer contest “Drum day,” where he won 3rd place for his masterful performance. Shortly after graduating from university, Adas began delving into composing music for movies, theater performances, and musicals. In 2014, he composed for the first Lithuanian horror movie “Rusys.” In 2015, Adas wrote for the musical “Mfest.” In 2016, nominated for the Golden Stage Award(Auksinis Scenos Kryžius) for music composed for the play “Gararar.” In 2017, awarded the Golden Stage Award(Auksinis Scenos Kryžius) as the co-writer of the best dance performance “Game Over” (“Žaidimas Baigtas”). Adas has performed in various countries, including China, South Korea, Taiwan, Israel, England, Poland, Sweeden, France, Russia, Ukraine, and Georgia. He also aims to widen his musical horizons by working with well-known Lithuanian artists: Žygimantas Kudirka (Mc Mesijus), Jurga Šeduikytė, Alina Orlova, Renata Dubinskaitė, Petras Vyšniauskas, Šarukas Joneikis, Solo Ansamblis, Rolandas Kazlas, Migloko, Ričardas Šumila, Kenny Wollesen, Jonathon Haffner, Dalius Naujokaitis, and others. Currently, the artist continues to work with “Sheep Got Waxed,” “Vilniaus Energija,” and his solo project “ADAS,” performing within Lithuania and internationally. In 2019, Sheep Got Waxed, and Tommy Moustache (NL) released a collaborative project Tommy got waxed with “Challenge Records,” in the Netherlands and 2020 Adas released his first solo album Mikroritmika. The artist continues to gain recognition internationally by helping the national jazz federation put together jazz albums containing all the best music created by Lithuanian jazz musicians annually. Finally, Adas has opened for artists like Ghostpoet, BadBadNotGood, and Kamasi Washington.